We're working to get the kiddo sleep trained at night now. For the last week he's been able to soothe himself to sleep on his own in the Zipadeezip in about 15 minutes. The first night was rough, with lots of crying, but now he just sort of rolls around until he difts off to sleep. He typically ends up on his side or back. Every now and then he'll get hung up in the crib slats, and I have to go reposition him. Also he gets stuck on his stomach sometimes and can't roll back due to the awkward sleeves of the Zipadeezip. When that happens I have to go back and give him a helping hand. In either isntance, I just reposition and leave the room. I'd love to just put him down in pajamas, but he needs his hands covered or he scratches himself terribly. The Zipadeezip has that covered because his hands aren't exposed.

It's sweet putting him to bed now. I just sing our little bedtime song, tell him "night, night", and place him in the crib "drowsy, but awake". He wakes up occasionally during the night, but more often than not he goes back to sleep on his own after minimal grunts and groans. I think I've had to go back there twice in the middle of the night for calming. I would say we are about 90% trained at this point.

Naps are a different animal though. We still need to swaddle and shush-bounce for 10 to 15 minutes to get one in most times. Not sure what to do here. He also tends to only go 30-45 minutes here, with an "every so often" 1hr+ nap. I'm hoping that as we continue on with the sleep training those naps get better and better.

Since I now own a Fender Mustang III amp, I decided to let go of my pedals. I sold off several of them to upgrade my bass. I'm moving from the Squier Affinity Jazz to a Hofner Ignition Club. It arrived Saturday, and I have to say, it's perfect for me. I can't wait to get some flats on it and really see what it can do. I've noticed the intonation isn't as great as the Squier, but I can work around that. I love the rest of the bass too much to care. Plus the short scale neck is a dream to play. Yeah, I like slumming it with cheap stuff. 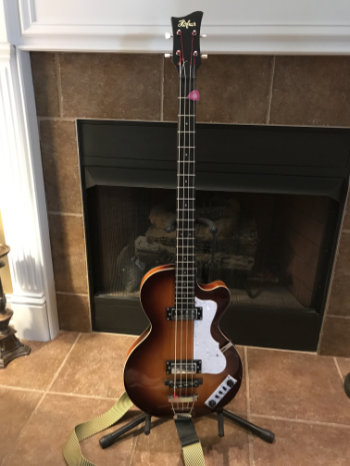